Here is an enchantress, hidden away at 1501 Yandell in El Paso; a Mission Revival cottage built in 1910 and occupied on January 1st of the following year. The home was built by Mrs. Ernestine Auerbach, the widow of Dr. Leo B Auerbach Sr., for herself and her newly married son, Dr. Leo Aurbach Jr.
Dr. Auerbach Jr. was an eye, nose and ear specialist officing out of the new Mills Building. He had just married Harriett Stribling Clark, and after a spectacular honeymoon in Europe returned to El Paso to continue his practice, living in this new home. The mysterious wedding was covered extensively on all of the society pages in the newspapers - no one knew who the bride was until they actually returned from their Eouropean tour. The marriage did not last, however. On October 31, 1911, the newlyweds filed for divorce.
The residence is a brick stuccoed "tube", capped with large Mission parapects at both ends. The entrance is on the west side of the house facing Langtree, which was known as Austin back then. The contractor for the project was Harry Corning, and the construction cost totaled $4,000. The building permit was issued to Mrs. Auerbach on 2/27/1910 for this 8 room bungalow. Interestingly, a period newspaper article referred to the Mission design as "typical" -- interesting comment.
We are unable to document who the architect was for this structure, however the year it was built and the style indicates that it was probably either Trost & Trost or Charles Gibson. The building is strongly reminiscent of Trost's John Nesum residence, also on Yandell. It also suggests some of the later work of Gibson, who would become 1/2 of the firm of Gibson & Robertson, especially his personal residence on Fort Boulevard and the Mount Franklin Country Club, extant and located off of Alabama. Of the two firms, we would lean towards Gibson as the architect because of the "blockiness" and parallel features throughout this design. However, we are unable to find primary documentation.
The building wore a lot of uniforms during its 110-year tenure. After it was sold by Mrs. Auerbach, it served as a rooming house through most of the 1930s. By 1939 it had been remodeled and became home to the First Assemblies of God Church, with Pastor L.C. Hodges at the helm. The Church remained at the location until at least 1949.
In 1958, it was the Union Hall of the International Brotherhood of Electrical Workers; and then in 1961 it became the home of the El Paso Building and Construction Trades Council.
In the 2000s, it was (and is) used as a Restaurant. Casa Viega, a Juarez eatery expanding into ELP, occupied the building in 2001; then by 2005 it was Sam's Chinese Restaurant, which was highly rated by the "Dining Out" section in the El Paso Times. Today, it is occupied and is the home of the Phoenix Palace Restaurant, who are open for inside dining during the pandemic, btw.
********************
Text, research and modern photography provided to Sketchclub.net Mark Stone, citing period newspaper articles accessed through newspapers.com 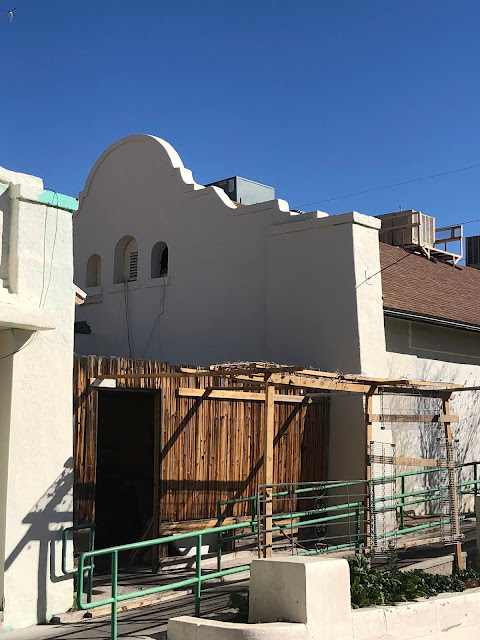