James C. Ballard was an influential retail store owner during the early 1900s in El Paso. In 1911, he was voted into the position of Vice President of the Retail Dealers Association, with Adolph Schwartz (owner of the Popular Dry Goods Company) as President. The J.C. Ballard Company sold women's clothing and accessories, and was formed on July 12, 1911. The location of the store was at 112-114 S. Oregon St., the location of the old State National Bank drive-through building, just to the south of the Momsen-Thorne building.

Ballard's earliest association with the apartment building that bears his name is in the 1922 City Directory. We can assume from that entry that the apartments were erected during or before that year. The Trost & Trost 1913 Nagley Apartments are next door to the south, and are are virtually identical in design, leading to the possibility that they were built together in 1913. However, we know that the two buildings had different contractors (Nagley = the Phoenix-El Paso Building Company, Ballard = Ponsford & Sons Construction) making their simultaneous erection unlikely. Additionally, we have found evidence that Ballard lived at the Hampton Court Apartments starting in 1918. By May of 1919, Mr. and Mrs. J.C. Ballard had moved to the Nagley apartments (El Paso Herald 5/19/1919), placing the erection of the next-door Ballard to between late 1919 and 1922.

I have found no documentary evidence that the Ballard Apartments were designed by Trost, however believe it was his design because of the striking similarities to the Nagley.

The Ballard Apartments, which still stand and are still in use as apartments, were built by Ponsford & Sons and is located on Ochoa just north of Montana Street in El Paso. The building is in Prairie School style, however lacks at least one of the building elements that would identify it as Arid America - the 4 foot eaves that are present on the Nagley. With minor differences, the two apartment complexes are virtual bookends sitting together on Ochoa St. However, the appearance of the Ballard is a little run-down, whereas the Nagley, which also still stands, is immaculately maintained.

There is no record of restorations at this property, however it looks pretty good for being a century old. When I took photographs on 6/11/2019, it appeared to be 100% occupied. It is a subtle beauty - easy to pass by, but once a person notices, it is a stand-out. 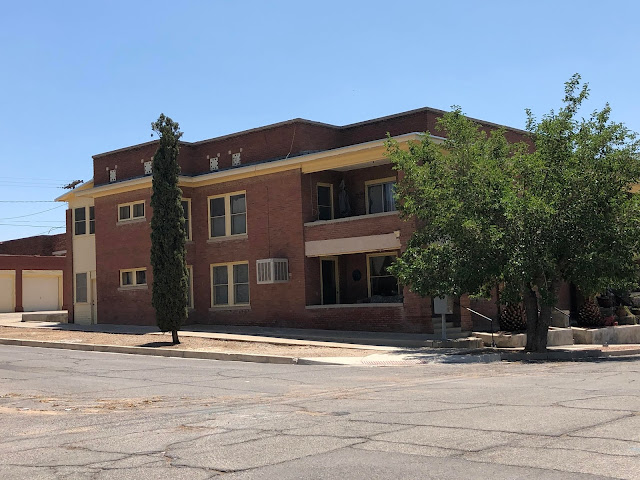