Cortez on the Plaza -- Hotel Cortez

Note: Make sure to check out the 7 interior images at the bottom of this page! Very nice.

Cortez on the Plaza is a 9-story "L" shaped tower on a two floor rectangular base, designed in a striking Spanish Colonial Revival by renowned El Paso architect Henry C. Trost. It is located in downtown El Paso at the corner of Mills and Mesa Streets, across Mesa from the San Jacinto Plaza. Currently in use as offices, the building was recently completely restored (2011) and is in outstanding condition. Contractor for this 1926 structure was Ramey Brothers Construction, and from inception to drawings to actual erection the building took 15 years to complete.

Cortez on the Plaza, originally known as the Hotel Orndorff, was built by the Sheldon Hotel Company, at a cost of nearly six million dollars, 3/4 of which was for interior decoration. Sadly, one of the original owners, Alzina Orndorff DeGroff, did not live to see the September 10, 1926 grand opening.

In 1885, with investors J.H. Stein, Ed Hawley, and John Friedenbloom, the original Hotel Vendome was built at the site by iconic El Paso photographer Francis Parker (El Paso Herald, 1/27/1912). Many sources believe this hotel was called the Parker House, however the El Paso Daily Times from 7/28/1884 identifies the Parker House as a different property, owned by Harvey D. Parker of Boston. The following year, the hotel was purchased by a Mr. Reeves (1/3 interest) and Mr. Raynolds (2/3 interest), and managed by S. Leipziger, who operated the Vendome for about 13 years (El Paso Daily Herald, 4/12/1899). We believe the Mr. Raynolds mentioned in this source is the same individual that founded the First National Bank in both Albuquerque and El Paso, giving Albuquerque its iconic Banque Lofts Building (Trost & Trost) and El Paso its American Furniture building, also Trost & Trost.

In April 1899, Tucson, Arizona hoteliers Charles and Alzina DeGroff, operators of Tucson's New Orndorff Hotel, purchased the Vendome. According to the Arizona Historical Society, they continued to operate Tucson's Orndorff until 1931 in addition to their El Paso ventures. They immediately closed the El Paso Vendome for approximately 60 days and renovated the property, adding a fourth floor and extending the building northward. They opened it at the beginning of July, 1899 under the name Hotel Orndorff (El Paso Daily Herald, 4/12/1899; El Paso Daily Herald, 5/01/1899).

In 1916, the Sheldon was sold to a conglomerate of El Paso businessmen, including the powerful Krakauer family, but management remained in the hands of Burt Orndorff (El Paso Herald 2/5/1916). The Sheldon remained independent of the Hotel Orndorff for only 4 years, when it was re-absorbed by the Orndorff Hotel Company. On January 1, 1920, the hotel company was renamed The Sheldon Hotel Company (El Paso Herald, 1/1/1920). Management of both properties continued to be handled by Burt Orndorff, who officed at the Sheldon.

In 1911, the company began to plan their large, fireproof hotel to replace the existing Orndorff (El Paso Herald, 11/9/1911). 15 years later, in 1926, they completed the extant Trost structure. For approximately 1 year, the new building retained the name Hotel Orndorff, until the property was sold in September 1927 to the Hussmann Hotel Corporation and was renamed appropriately (Commercial Structures of El Paso by Henry C. Trost thematic nomination, page 7). We are unaware why the new structure was sold so quickly, however the company divested itself of the El Paso Orndorff at that time and the Tucson Orndorff by 1931, and had famously lost the Sheldon to a spectacular fire in 1929. The Sheldon Hotel Company was no more.

In 1935, the property was sold by Hussmann to the West Texas Hotel Company (Ref: Trost Society). A contest was held to rename the hotel, and the winning name, submitted by El Paso attorney Thornton Hardie, was Hotel Cortez.

The hotel finally closed in 1970, and the building was purchased by Jorge Murra of Torreon, Mexico (https://cortezattheplaza.com/history). In 1972 a fire destroyed a portion of the interior, and in rebuilding Murra lost much of the hotel's early interior design. Historical websites unfairly describe it as a "gutting". Mr. Murra leased the building to various U.S. Government agencies, including the Job Corps. In 1984, the property was purchased by Carroll, DuSang and Rand, an investment firm, who remodeled the building into an office structure. Shortly thereafter, it was purchased by a subsidiary of the El Paso Electric Company called Franklin Land and Resources, who continued the process of interior and exterior restoration.

By 2011, ownership of the property had passed to George Dipp and Pasotex Realty LLC. On February 1, 2011, El Paso experienced a week of extremely cold weather where temperatures remained below the freezing mark. The highs on February 2 and 3 did not go above 10 degrees, and the rest of the week was even colder (ref: weather dot gov). A water pipe burst on the 4th floor of the Cortez, doing serious, widespread damage to the interior of the building. In response, Pasotex thoroughly remodeled the entire building and restored the first and tenth floors to their 1926 specifications. In the years since that event it has been excellently maintained.

The Cortez on the Plaza building stands as a tribute to one of the greatest minds in Architecture. From a distance, this cube seems generic; but as we walk closer, it begins to dazzle with an insurrection of the most amazing and intricate design. In a time when many Trost & Trost properties strive simply to exist, frequently threatened with demolition, the Cortez rebels and remains one of Henry C. Trost's landmark creations.

Text and research provided by Mark Stone, citing the above referenced links and newspaper clippings. Newspaper articles and advertisements used to create a narrative of historical events were accessed at either the Library of Congress' Chronicling America project (https://chroniclingamerica.loc.gov/) or at the University of North Texas (Denton) Digital Repository (https://texashistory.unt.edu/)

The following 7 images were taken by myself on 8/13/18. This is the current state of the building's interior, and it is nothing short of gorgeous. Every square inch spotless and well appointed. 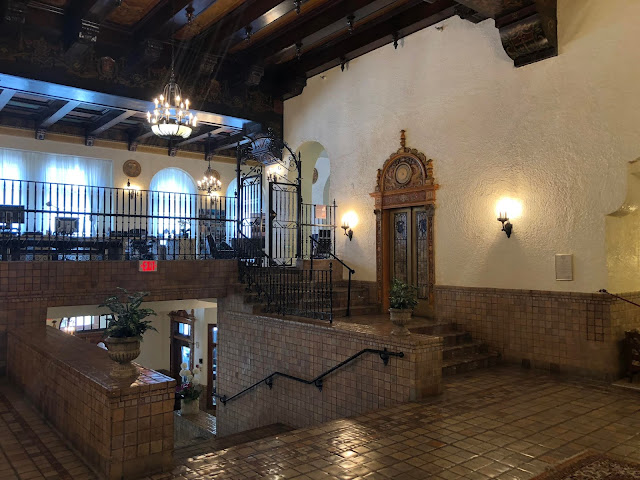 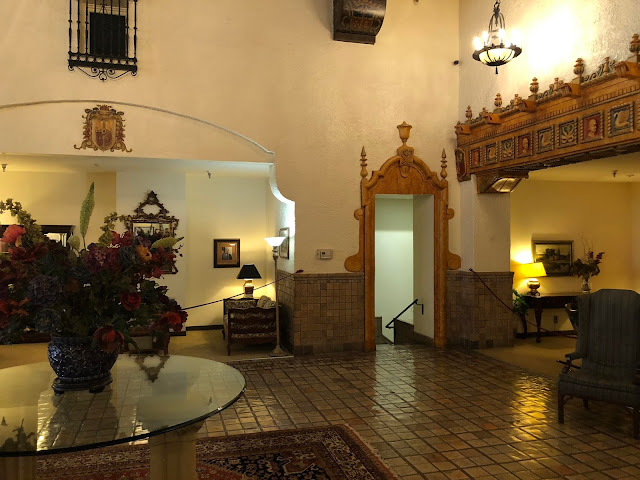 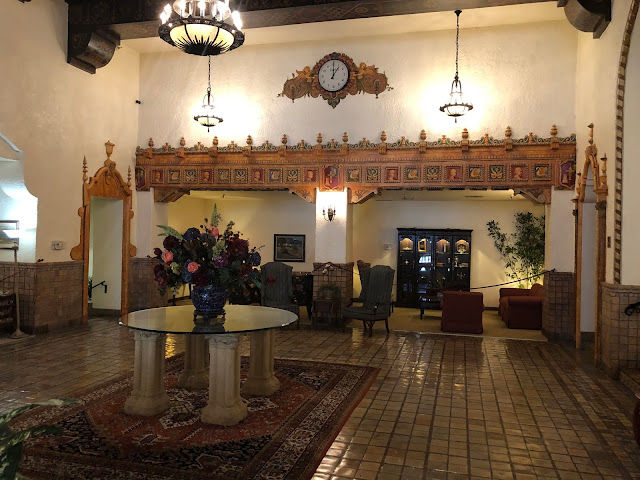 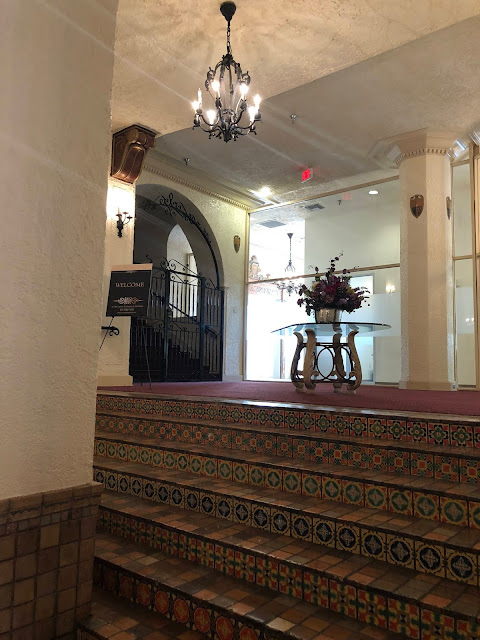 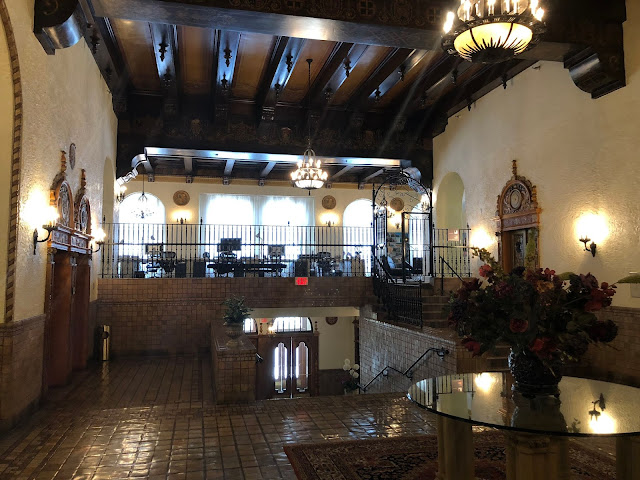 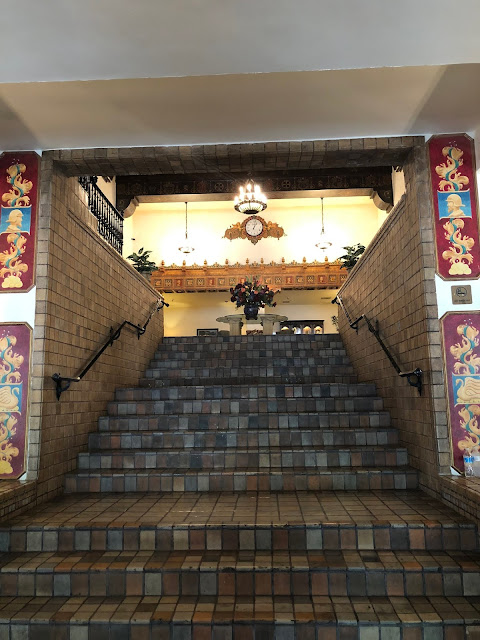 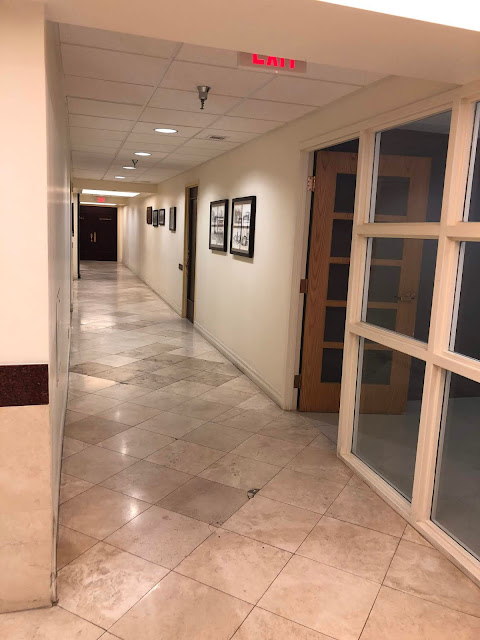