The El Paso, Texas building that housed the Mt. Franklin Country Club, and then the Southern Baptist Sanatorium, was built in late Spring through Thanksgiving 1916. Work began on April 21, and wrapped up the day before the Holiday. The Country Club began to use the structure with a Thanksgiving Day Dedication, but did not have their official opening ceremonies until the Fourth of July, 1917.

The building stands today, mostly vacant, tucked in behind the Baptist Spanish Publishing House at 7000 Alabama. It was designed by the El Paso architectural firm of Gibson & Robertson. The Sanatorium's 1918-1919 additions and renovations were designed by the Chicago firm of Schmidt, Gardner and Martin. The Sanatorium opened Friday, March 7, 1919.

The Mt. Franklin Country Club had a short but glorious tenure in the building. The officers of the City-owned organization read like a who's who of the El Paso elite: J.H. Nations, President; Julius Krakauer, Vice President; U.S. Stewart, Treasurer; and Park Pittman, Secretary. Advertising for the Club was extensive, and it even included a shooting range and provided the necessary rifles. However, in a very short period of time they realized it could not compete with the busy and prestigious El Paso Country Club just a couple of miles to the south, closer to the city. By May of 1918 they filed for bankruptcy and had to sell the furniture and fixtures.

On May 12, 1918, the 134 acres held by the Country Club, including its building, was sold or donated to the Southern Baptist Church for the purpose of erecting a huge Sanatorium. The Tuberculosis pandemic of the early 1900s was reaching staggering proportions, and the Church's offer to build an additional Sanatorium in El Paso was welcomed. The land, worth an estimated $20,000 at the time, was donated and the building was sold to the church for $45,000.

The iconic Chicago, Ill. architectural firm of Schmidt, Gardner and Martin was hired to design the Hospital, with architectural elements to be based on the design of Gibson and Robertson's pre-existing Country Club building, which was to remain intact (and did. It's still there). The original sketch for the structure from the Chicago firm showed a staggering building complex substantially larger than what was actually built. In print marketing, the Sanatorium used the Architect's drawing rather than actual photographs of the facility. Perhaps they had hopes of expanding as they grew.

Renovations and new construction was completed  for the Sanatorium on Friday, March 7, 1919, and the first 6 patients arrived the following Monday. H.F. Vermillion was the Superintendant, with C.W. Coutant, M.D., as the Medical Director.

The building design was classic Gibson and Robertson: a Mission/Spanish eclectic mix, with their signature 90 degree angles and parallel lines. It is very reminiscent of Charles Gibson's personal residence on Fort Boulevard, although it is lacking the snowstorm of Mission parapets, and adds some arched windows. Their interesting Brophy Apartment structure in Magoffin follows the same recipe: 90 degrees, parallel lines, no curves, yet well stocked with Spanish/Mission features. The Sanatorium additions from Schmidt, Gardner and Martin provide a very similar design, as requested, and include endless rows of pleasing, arched windows.

Recently I was able to take new photographs of the building, and it is sound but deteriorating. Some of the stucco is peeling off, revealing at places a rock wall and other places a brick wall. The wooden frames in the arched windows are rotting, and all of the roadways around the facility are deteriorating. The grounds are overcome with weeds and desert plants. The building presents an interesting dilemna - too expensive to demolish, yet too isolated to restore and use. Hidden behind the Publishing House, it is not visible enough to market to a large company. It is quite large - occupying the 134 acres mentioned above. Its only hope is to attract a single tenant that could utilize the entire complex - perhaps a warehouse or a museum - but its location is very poor.

The exterior bears the respective Architect's untouched design. The Sanatorium's interior courtyard is now covered with a roof, evidently a building addition, except for a small area on the west end of the complex that remains open-air. Of course, the Baptist Spanish Publishing House has erected their newer building, facing west towards Alabama, which now fronts the entire complex. The view from the front of the Gibson & Robertson Country Club building is striking, a beautiful panorama stretching for miles - it's easy to see why the location was selected.

The Sanatorium was built through the kindness and giving hearts of all levels of the citizenry of El Paso, in addition to donations that came in nation-wide from the Churches of the Southern Baptist Convention. H.F. Vermillion, who's brother was a Pastor in El Paso, traveled extensively before the Hospital was opened, especially on the east coast, passing out pictures of the building and hawking El Paso's excellent, Tuberculosis-beating weather. The Southern Baptist Sanatorium joined El Paso's St. Joseph's, Hendrick's, and Hotel Dieu in what seemed at the time an un-winnable war. By the early 20th Century, TB had already killed one in seven of all people that had ever lived.

Ironically, the Officers and Members of the Mount Franklin Country Club led the fundraising charge to build the Hospital. The heart of El Paso.

Text, modern photography and research provided to the El Paso Sketch Club by Mark Stone. This historical narrative is derived from newspaper articles and City Directory entries accessed through the Library of Congress' Chronicling America project at https://chroniclingamerica.loc.gov/ and the University of North Texas (Denton) Digital Archives at https://texashistory.unt.edu/ 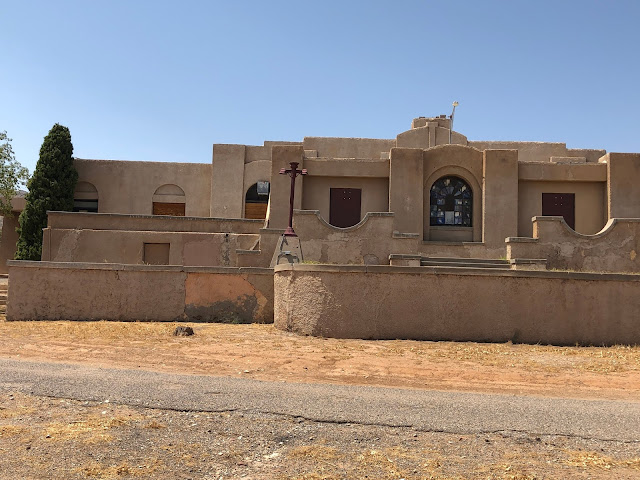