Here's a beautifully designed school in Deming, New Mexico, designed by Trost & Trost and erected in 1928-1929. Deming is a treasure trove of wonderful Trost designs, including the Bank of Deming and the First National Bank of Deming (plz see https://www.facebook.com/TrostSociety/posts/4049288718522497), the iconic Deming Armory (https://www.facebook.com/TrostSociety/posts/2177473302370724) and a number of other residential and commercial designs. The Alice Gould Smith School is another in a city rich in Trost heritage.
Alice Smith was a pioneer of teaching in the Deming Schools, beginning her career on July 5, 1892. She was aggressive with education: not waiting for the organization of public schools in Deming, she evaluated the needs of the local children and started her own private school. She gave the children of Deming the basic education they needed while the School District there was catching up. After 35 years of teaching, she may have been alive to witness the March 28, 1929 dedication of the school named for her. There is a bronze plaque above the entrance to the school honoring her accomplishments.
May have been alive? The Deming Headlight newspaper article detailing Smith's history, dated April 18, 1963, states that she was there to witness the dedication of the school named to honor her; whereas the March 29, 1929 edition of the same paper called her "the late Mrs. Alice G. Smith". We suspect the 1929 piece to be more accurate, but think it would be nice if she had been alive to see it.
The building's design utilizes a stock Trost & Trost school layout which we see in several El Paso schools designed by the iconic firm, plus their Central School in Lordsburg. This is not a bad thing, because the exterior design of each school is very unique, and the Gothic-flavored Alice Smith School is a work of art.
The building is a light-colored variegated brick two-story, with 21 rooms. The contractor was El Paso's Ponsford & Sons, and the cost to erect this gem was $180,000. Erection of the building took less than a year, opening with its March, 1929 dedication. Another flavorful Deming, New Mexico Trost & Trost, this building adds to the heritage of the Southwest's most iconic architectural firm.
***************
Text and research provided to the sketchclub.net by Mark Stone, citing period newspaper articles accessed at newspapers.com. Also citing the Henry C. Trost Historical Organization at https://www.henrytrost.org/buildings/alice-g-smith-school-building/
All photographs are Google Earth Street Views, accessed 2021 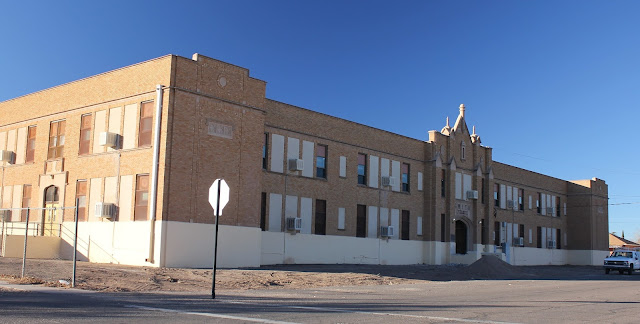 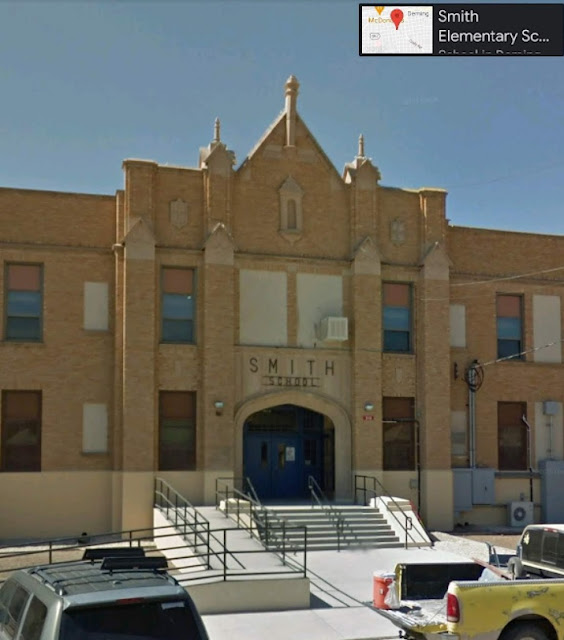