As part of a sudden, explosive building boom in 1909-1910, the Abdou Building, located at the corner of Mesa and Texas Avenue in El Paso, adds interesting character to a walk down Mesa Street downtown. The 7-story structure, designed in a Romanesque Revival style, was purchased by Sam Abdou in 1925, giving the building the name we are most familiar with today. It is unique in that its exterior bears no parallel lines, giving the impression from its northern view that it is very slender and quite ready to topple over.
The structure was built by the Rio Grande Valley Bank, and was known by that name for its first 8 months. It was then sold to Two Republics Life Insurance, who owned the building until approximately 1925, when it was purchased by Abdou.
We see clear Louis Sullivan ("Sullivanesque") influence in Henry C. Trost's Romanesque Revival design of the building, which is reminiscent of Adler & Sullivan's first major commission in Chicago, the 1889 Auditorium Building. The Abdou is frequently referred to as Chicago School, which is an equally valid description of the style.
The building has recently been completely restored and remodeled into high-end apartments, and is gorgeous, especially when lit at night. According to Elpasomoves dot com, the entire building (apart from the retail spaces on the first floor) has been divided into 9 apartments, many of them taking an entire floor. Rent averages $2,500.00 per month with parking available at the Cortez parking garage a block to the north.
Text and research provided for Sketchclub.net by Mark Stone, citing the above referenced sources, in addition to references in image comments.

New interior elevator lobby images taken by myself on March 22, 2019: 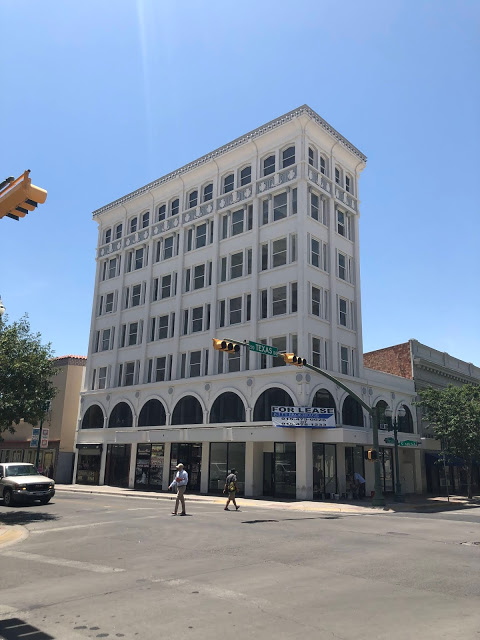